Debris produced by self-taping screws during reroofing projects can be problematic
By: Jim D. Koontz and Gerald B. Curtis 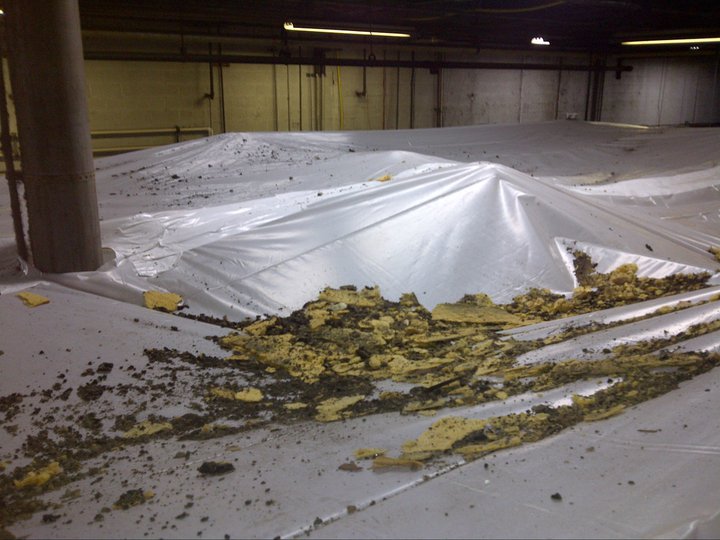 Building codes require a roof assembly to sufficiently resist uplift forces caused by wind events that may occur during the roof assembly’s anticipated life. Mechanically attaching roof insulation and roof membranes is one method that provides enough uplift resistance to hold a roof system in place.

Using self-tapping screws to attach roof insulation and roof membranes to stell roof decks has become a common attachment method. However, problems can arise because of debris generated when screws are replicated during reroofing projects. Our company conducted a test using various screw types and sizes to examine the quantities of debris produced by different screws and address how debris can affect a building’s interior, as well as whether screw debris poses potential problems for facilities that manufacture such items as food or electronics

Before mechanical attachment, insulation commonly was secured to steel roof decks using hot asphalt. However, the hot asphalt method has flaws; when an interior fire occurs below a steel deck, the hot steel melts the asphalt, which drips through weld holes or laps in the deck and onto the fire below. The dripping asphalt acts as an accelerant, spreading the interior fire.

On Aug. 12, 1953, the uncontrolled spread of fire through most of a 1.5 million-square-foot General Motors plant in Livonia, Mich., was attributed mainly to asphalt dripping through the building’s steel roof deck. As a result, the insurance and roofing industries began to explore other insulation attachment methods.

Debris collected below one of the decks

The first mechanical attachment methods were used with hot asphalt adhesives. This involved driving a semicircular steel fastener with clips through a mental deck with a rubber mallet. The clips, or “fish hook” extensions, along the sides of a fastener would engage the metal deck, securing the insulation. A second method involved a serrated steel shank fastener that had limited attachment to a metal deck. These methods resulted in many roof systems falling during wind events.

Eventually, self-tapping screws with plates became the industry norm for attaching roof insulation to steel decks, eliminating the need for asphalt between the bottom of roof insulation and top of a steel deck. Uplift testing performed by testing laboratories such as FM Global and Underwriters Laboratories Inc. resulted in the development of frequency and pattern for mechanical attachment. The quantity and location of fasteners used varies depending on the roof insulation’s type, thickness and manufacturer.

To meet building codes, the number of self-tapping fasteners installed can dramatically increase in the field and at perimeter and corner locations.

The use of self-tapping screws involves penetrating a steel deck.

During this process, as a screw rotates, the drilling motion creates a hole in the steel deck. Steel filings from the screw, steel deck and coating material are generated and can fall into a building’s interior. The debris typically is of little concern when installing suspended ceiling or roof systems on new construction and when reroofing is performed above ceilings. However, during a reroofing project on an occupied building without a ceiling, filing and coating debris generated as existing screws are removed and new screws are installed can be problematic.

There have been no previous tests performed regarding the quantity of debris generated when roofing components are mechanically attached to a steel deck. To examine this, our company acquired eight types and sizes of self-tapping screws commonly used to secure roof insulation to steel decks;

Using a standard electrical drill, three sets of eight self-tapping screws were driven into two 22-guage steel decks that had been galvanized and painted. The steel decks were mounted over an enclosed box lined with a clean membrane. The filing and coating debris that fell into the enclosed box were collected separately as the screws were driven in and out of the steel decks. The screws penetrated about 3/4 of an inch through the decks; insulation was not used above the decks during the test. The debris then was weighed on an analytical balance and microscopically photographed so our company could characterize the debris that would enter a building using photographic analysis. 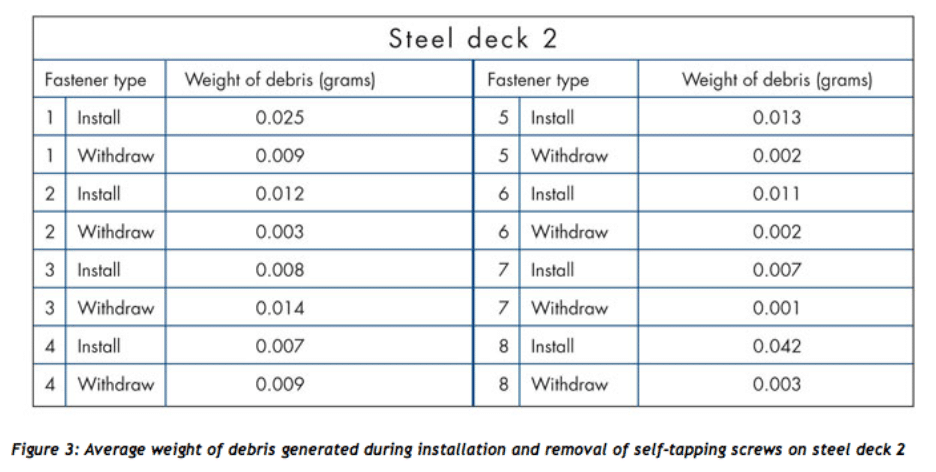 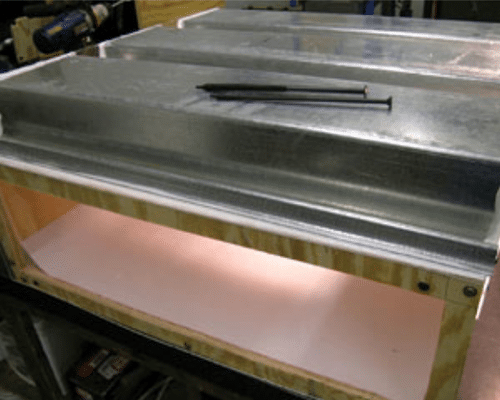 Screws and one of the metal decks used during the test

The steel filing debris produced during the test contained sharp edges as documented in microscopic photographs. Although the quantities of debris may be small, any amount of debris contamination may be unacceptable depending on the contents of and activities performed within a building during a reroofing Interior Protection project. As an occupied building is being reroofed, metal filing debris produced when installing self-tapping screws will fall to the building’s interior. For most reroofing projects, the filing and coating debris does not present a problem, especially if there is a ceiling. However, depending on a building’s interior activities, the debris can lead to contamination (by the metal or coating from the deck or screws) of manufactured products such as electronics, food and pharmaceuticals if debris protection is not provided. Even small quantities of debris in some critical manufacturing operations would be intolerable. The test results show that some debris undoubtedly will enter a building’s interior during the installation and removal of self-tapping screws.

Where no ceilings exist, failure to sue some form of interior protection may lead to contamination of sensitive equipment and/or products manufactured within a building. This in turn could result in safety and health issues for manufactured products and their end users; for example, falling debris could cause sharp steel filing to contaminate a food product.

Alternative methods of attaching roof insulation and cover boards, such as using foam adhesives and high structure cleaning could be explored. However, Though many foam adhesive products provide sufficient adhesion, insurance groups and codes authorities such as FM Global have not yet approved using foam adhesives on steel decks.

You should consider the potential ramifications of filing and coating debris generated during reroofing projects when there are no ceilings, especially because steps can be taken to prevent debris from contaminating a building’s interior.

Safety is of utmost importance during roofing projects, and roofing professionals must strive to ensure work is performed as safely as possible. Be sure you notify building owners of potential debris problems before a project begins and provide them with prices for methods of protecting the building’s interior during a reroofing project if it is necessary.

Contact CLEANWRAP Interior Protection by calling 888-597-3334 or sending an email to [email protected] – or reach out to us on Facebook and let us show you how our interior protection expertise can work for you on your next re-roofing or construction project. Also read more about the cost of interior protection.

There are (2) types of Interior Protection Systems – Underwriter Labratoried (UL®) Approved and those not approved by UL®. Although many of CLEANWRAP’s clients request a Clear or Fire Rated Interior Protection System installed in their facility, CLEANWRAP also offers (2) systems which are approved by UL® & meet NFPA13 requirements for installation beneath fire suppression systems.

A major cause for concern when a Temporary Interior Protection System is being installed is – “How is this going to affect the Fire Suppression System”. We hear this question time and time
again when meeting with clients and perspective customers on jobsites. As an addition, certain facilities are prompted by their insurance companies to make sure their fire suppression systems are not impaired at any time.

CLEANWRAP’s Hot Drop Away & Green Drop Away Systems will give you peace of mind knowing the Fire Suppression System will still function as designed throughout the Temporary Interior Protection process. CLEANWRAP’s UL® Approved Systems incorporate proprietary materials and installation methods which utilize a heat release mechanism within each system.

In the event of a fire, our systems have mechanisms built in that cause the plastic to “drop” allowing the plume of heat to reach the sprinklers and activate the sprinklers as they were designed to function.  When we say the system “drops”, the material does not drop to the floor, it releases at the seams and the polyurethane sheets hang from the center ties allowing the heat to rise thus setting off the fire suppression system.

For further information on CLEANWRAP’s UL®-approved options, please contact us!